What are the risks of divestment?

To find out if fossil fuel divestment harms investors, we need to ask why investors seek out fossil fuel stocks in the first place.

Most folks are familiar with the frustrating and seemingly interminable price increases at the gas pump. Indeed, oil prices have a significant impact beyond the pump. Oil is a crucial input cost for businesses, so when prices go up, some of that increase gets based on to consumers. From 1990 to 2017, for every $1 dollar increase in oil prices, consumers can expect to pay $0.21 more not just at the pump, but across their entire consumption basket.

Since 1968, gasoline prices have increased by 5.80 percent on average each year, whereas average annual core inflation (excluding energy and food) was 4.60 percent over the same period. By Investing in firms that benefit from rising oil prices, investors can secure some upside from rising oil prices and thus dampen the effects of inflation on their portfolios. Investing in fossil fuel companies has been an effective strategy to make sure that your wealth doesn’t erode away to inflation.

Grossly over-simplified, nearly every firm is an oil producer or oil consumer. Oil is synonymous with modern industrial transportation: planes, trains, automobiles, and container ships all use oil.

So when oil prices increase, costs for businesses that consume oil -- everyone else -- go up.

Worldwide GDP growth goes hand in hand with higher demand for energy -- and therefore, fossil fuels. Besides electricity generation, heavy industry is a huge consumer of energy in developing economies: think of Britain, the United States, and Germany in the 19th century or South Korea and Japan in the 20th. 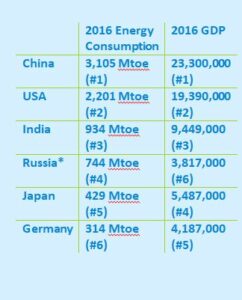 Unfortunately, fossil fuels continue to underpin global energy consumption despite rapid technological advancement. Replacing it requires completely overhauling society's energy production & transmission infrastructure, so any energy transition will take some time. Industrial processes and transportation tend each to account for about 1/4 of energy consumption; even if countries get serious about deploying renewables, countries that pursue an industrialization model of development will increase their demand for fossil fuels.

Careless divestment can have costs...

Let's say you divested from fossil fuels in 1970, but maintained your exposure to the rest of the stock market as normal.

However, since consumer prices had risen by 87% over that time, the purchasing power of your wealth would have actually fallen.

This is a deliberately extreme example -- a repeat of this phenomenon isn't necessarily likely, but this kind of thing is what happens on a much smaller scale when energy prices go up.

How do we solve this?

Ideally, you would want to replace your fossil fuel assets with stocks or funds that have the same risk / return profile as your divested assets. That's why we developed the "3 Rs" of carbon divestment which focuses on removing carbon assets without jeopardizing diversification.

Are you investing with your values?

If you own the S&P 500 you own fossil fuel firms. Take the free Carbon Screener and start investing with your values.

Please complete the form below to access the free Carbon Screener.